Meet Dawn Woolcock –  A seasoned I.T. professional.   As a child she wanted to be a Doctor, her desires took her a different direction and today she is a Manager for a major Technology Company.    Read more below… 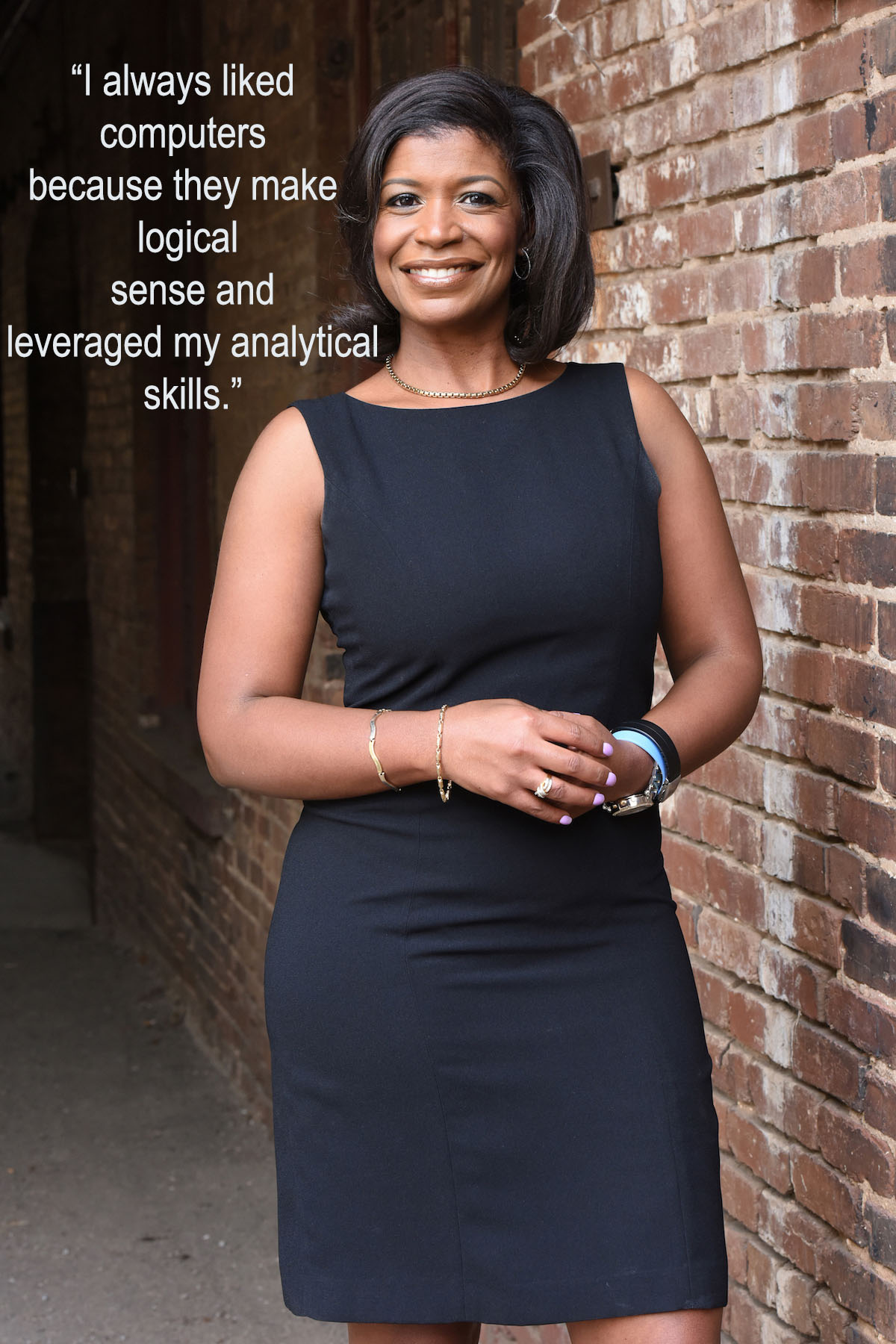 My journey began in Nashville Tennessee.  I was fortunate to be born to two very driven parents who had high hopes and aspirations for me.  Both of my parents attended Tennessee State University and both excelled in their studies.  They were both studying to become educators, so every day in my house was a lesson.  This served to help me always try to do my best and to excel.

As many children do, I had several different career aspirations.  Initially, being from Nashville, I wanted to be like the Olympic great Wilma Rudolph, who was a Tennessee State University Tigerbelle.  I did run track during my school years, but decided that being a track star was not for me.  However, during my years in school I noticed that I excelled in Science and Math.  This lead me to want to become a cardiac surgeon.

With this hope in mind, I began to focus my studies towards this goal.  My school electives were heavily focused on sciences and I would enter competitions focused on the biomedical sciences.  Because my studies and electives were concentrated on sciences, I had taken many computer classes in which I had performed well.  I always liked computers because they make logical sense and leveraged my analytical skills.  However, because I like to take care of and help people, biomedical sciences seemed to be the road for me.  All of this changed, for the wrong reason, when I entered college.

As a freshman at Spelman College when registering for my classes and declaring a major, it was then that I realized that I would have to do an additional 8 years of study, on top of the Bachelor of Science, to qualify to become a heart surgeon.  Unfortunately, this seemed to be overwhelming to me, and I chose instead to major in computer science.  Although I would urge others not to change their dreams because of the work it takes to gain them, changing my major worked out well for me.

When I graduated from Spelman, I had the great fortune to by hired by Hewlett Packard (HP) as a college hire.  At HP I accepted a position logging customer service calls, just to get a foot in the door.  But, I had higher aspirations, to live up to, I wanted to be an engineer.  One thing that surprised me when I accepted the engineering position is the number of black women who asked me if I was intimidated to work in engineering, which was a field predominantly populated with white males.  I explained that the needed knowledge is found in books and I could learn from books just as anyone could.  Therefore, there was no reason for intimidation.  Although I was taken aback by their sentiment, I used their concern as fuel to be an example to other women and to show that as a demographic, we can excel in technical fields.

Little did I know this would be the beginning of a long journey.  I delivered technical support for 8 years and graduated to become a senior engineer.  In this role I resolved difficult cases that others could not resolve and served as a mentor to other engineers.  Because I was proficient in mentoring, I went on to also teach technical troubleshooting to my peers. I had found my niche.

Although technical support was one of my favorite roles, I needed to continue my professional growth.  So, I went into account management where I had the opportunity to work with managers from the support to executive levels.  Knowledge of executive level communication and having developed a good sense of business, I was ready to move into management.  As a manager, I have learned new skillsets which include leading and motivating teams, organizational budgeting and global business.  I eventually, went on to manage other managers.  This is not a resting point for me.  I am anxiously awaiting my next opportunity for advancement.

As I look back over my journey one of the biggest difference makers was having faith in God and the gifts that he has given me.  Through this faith, when I was tested in ways that made me doubt, I always had faith in what was inside of me.  This allowed me to always stay “hungry” for opportunities and be prepared when they presented themselves.  Everyday was an interview and every interaction held potential.  This way of thinking has helped to open doors for me.  I can’t wait to see what is next.