Introducing Khadijah:  Khadijah hails from the BIG APPLE – NYC.  Her ultimate goal is to work in the Cyber Forensics world.  Today she does Web Development.  In her own words … ” Everyone pushed me towards being a doctor, lawyer, nurse, the typical respected career fields. I had no interest in any of them.” 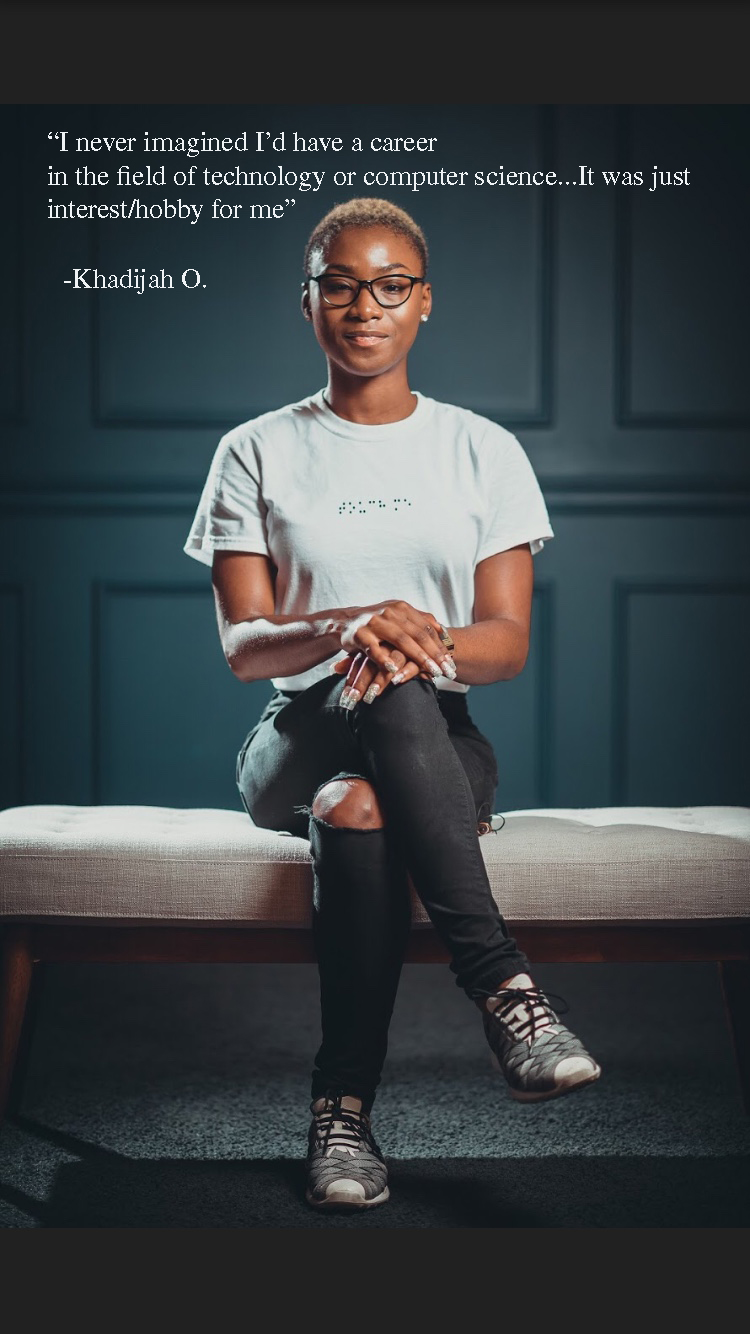 I’m from New York. Born and raised in Brooklyn, New York. Currently residing in Jamaica, Queens. First American born for my parents. My mother is Jamaican and my dad is Nigerian. I didn’t grow poor but I wasn’t born with a gold spoon either. if it was one thing I very much understood the meaning of hard work and dedication to get what wanted and needed. When you have immigrant parents that’s the number one lesson I life. Watching them strive for excellence always meant I had to go 5x harder.

Fortunately I was able to have a computer in my house growing up. I think I had my first home computer when I was in 2nd/3rd grade. My parents were pretty hip to technology because they used it for course work in college etc. I wasn’t allowed to touch them though haha. The first time I was introduced to computer was at school during technology class they taught us how to type using Mavis typing game. And ever since I was a computer game kid. I loooooooved computer games. Still do, I’m a Sims fanatic had every single one from 1 to 4.

I never imagined I’d have a career in the field of technology or computer science though. It was just interest/hobby for me. I liked surfing the web and playing games. I had myspace profile at like 15 but it was really because i enjoyed creating and design themes and my page. That was my first real experience with HTML and CSS. In high school, when it was time to start thinking about college I originally wanted to be a dancer. But coming from my background that wasn’t a thing. Everyone pushed me towards being a doctor, lawyer, nurse, the typical respected career fields. I had no interest in any of them. One day during a conversation with my technology teacher, he advised that I just did computer science in college because it was small but it was growing and I’d make money from it in the coming years. And since I had nothing else I just figured why not, sounded good to me. It wasn’t until I read the book the “Girl with dragon tattoo” that I had a lightbulb moment and figured I wanted to be a programmer or hacker. She was so dope and badass to me. She worked for herself, on her time wherever and however she wanted. And that’s what I wanted. Freedom. I wanted a career that didn’t require me to always have a boss or someone telling me what to do. There’s more to her story but that’s what stood out to me and I was pretty much hooked.

I first went to St Johns and majored Cyber Security but I was having financial problems. I couldn’t afford to be there and i didn’t receive financial aid. So I transferred City Tech and it was there that my real  journey of being a woman in Comp. Sci started. Only girl in my classes and most times only black girl. I had a lot classes with older men that were already in the field who were just there for a degree and so the professors didn’t do as much teaching which sucked for me who knew nothing about anything. I also wasn’t taken seriously because I didn’t look the part. Nothing about me said traditional geek. Especially cause I’d be “dressed for the runway” as one of professors would say to me every time I walked in class. In other words, I had style and I wasn’t afraid to show it or at least thats just how i took it. I had a conversation with my dean because I was struggling my first year being there. She told me I was pretty and maybe I should major in fashion since I dressed so nice since I was having hard time in this major. I would be good at that. But even after that, I didn’t quit. I just knew I’d have to work harder and be determined if I wanted to be like Lisbeth. And that’s pretty much what I did for 4 years. I now hold an associate’s and bachelor’s degree in Computer Systems Technology. I am a self taught programmer with some level one/two IT skills. And I’m still learning.

Today I am a Web Developer who is making the transition into Software Development. I’m also STEM educator where I teach young kids how to code and build themselves as digital entrepreneurs by building websites and apps. Currently, I’m working on a new project called Technistas NYC that will be introducing traditional IT roles and opportunities to “minority” girls. I put quotes because don’t believe there’s anything minor about us. We’re very major !

Off the court, I’m a model. I do love fashion and dressing up and being pretty. So my dean wasn’t completely wrong about what she said. I spend my free time doing photoshoots and participating in fashion shows. Which people tend to think it’s crazy that I could do both. I never see what the big deal is but my hope is to show girls that there’s no “look” to a Computer geek or to being smart period. We can do everything and anything we put our minds to. May not be easy but the point is to enjoy our journeys and continue to push forward for the things we want.