Introducing Pam Reid –  In her own words… “I get the greatest satisfaction of the looks on their face when they realize that know what I’m doing” , she says about men in the Technology field.  Today she is a Technical Project Lead, taking on demanding projects for a major Automotive Company.  Continue reading below… 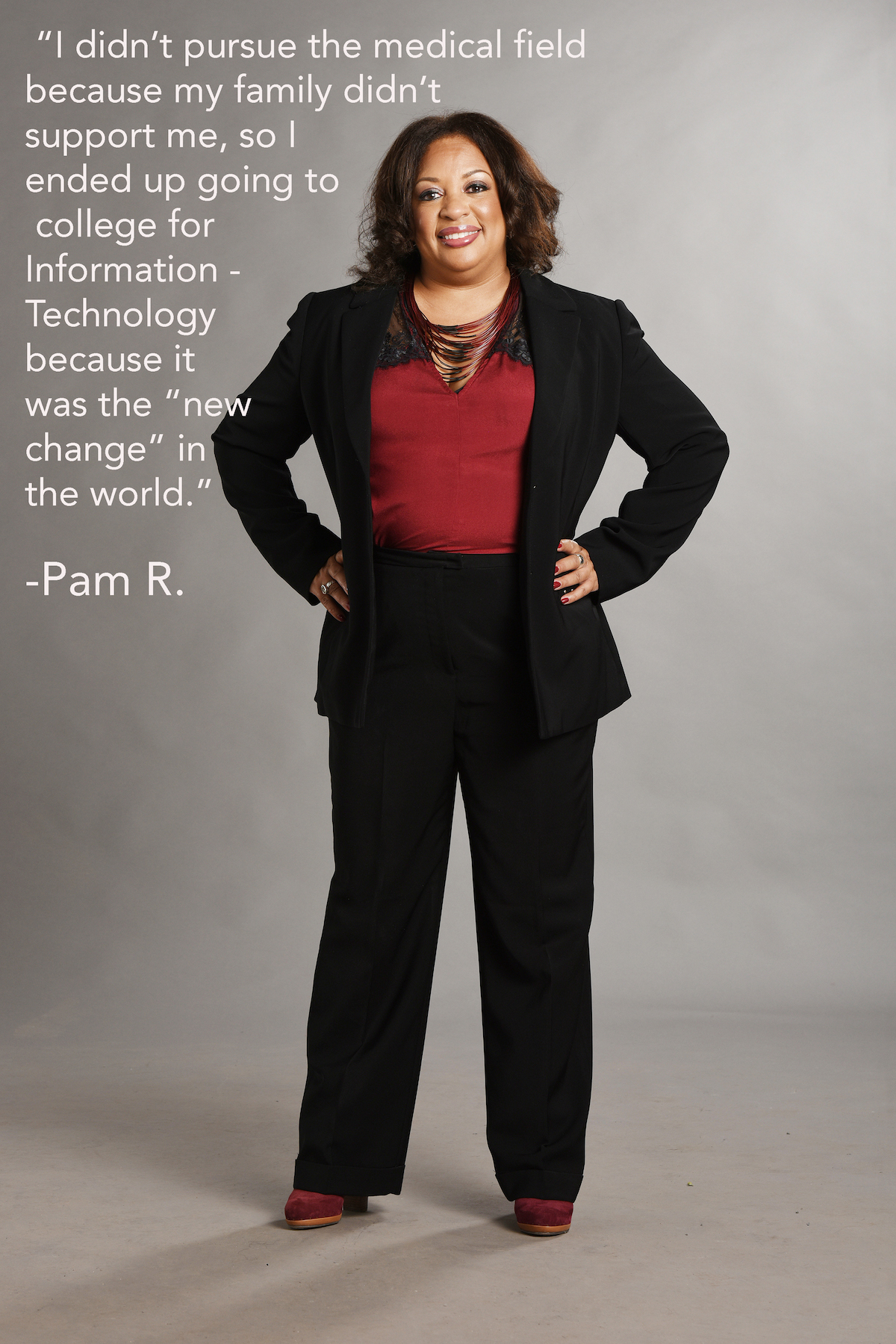 This Minor-I.T. opportunity really gave me the chance to think about how I got into this profession.

I had several passions. My mom wanted me to be a school teacher, but at the same time I became fascinated with the heart, yes, the heart. My father had open heart surgery in his late 40’s and wasn’t given until another 7 years to live. Well my father is now 83 years young.  Since his open-heart surgery was performed at a Medical teaching school, I had the opportunity to watch the surgery. All of the organs functionalities captivated me.  But, I didn’t pursue the medical field because my family didn’t support me, so I ended up going to college for Information Technology because it was the “new change” in the world. I grew up in a large family where I was the only girl out of 7 brothers. They were all into sports and women. One of my brothers had the opportunity to attend my Mom’s Alma Mater at the time, but only lasted a week. Another brother was a musical genesis and had a full scholarship to renown music school, but my Mom held him back and didn’t want him to leave. My mom attended Morris Brown and was very smart and created, but after attending college only for a short time, family became her first priority and now she and my Dad have been married for over 64 years. The rest of my brothers decided to take on the blue-collar world and enjoy their family.   I was ready to leave the house and attended West Georgia College for the first year. I did nothing but party and flunk out the first year. My parents told me, they were not paying for school, especially since I was almost a straight “A” student in high school. So, I had to buckle down and attended DeVry institute of Technology in their Computer Information System program. I had to go to school, leave school, go to work, leave work, go to lab and then home. I had to take school seriously and on top of that, help pay for it. Since DeVry became properly amongst students worldwide, the classes at DeVry were pretty full. We started off with 100 students the first semester and by the end, half the class were gone. The school was pretty challenging since we had to attend year-round in order to graduate in a compacted time. This helped me make up the time I missed while at West Georgia.  I graduated at the top of my class with a Bachelor of Science in Computer Information Systems.  I also have a Master in Business Administration.

I have been working in the Information Technology field for over 20 years. I’ve been in the Operations area and now I am a Technical Project Lead, taking on demanding projects for a major Automotive Company. I really enjoy the challenges. This field has taught me a lot. It’s a male-dominating field, when Men don’t think the women can do the job, but I get the greatest satisfaction of the looks on their face when they realize that know what I’m doing. It’s not a sense of arrogance, but a sense of knowing no matter what obstacles, set-backs, opinions, or negative comments, that I know all things are possible with God. Nothing can defeat me!