Introducing Rasheeda   In her own words.. ” I believe that in life there’s opportunity to be lots of things.  Don’t let people or your surroundings dictate who you are supposed to be or what you’re supposed to be.”   Rasheeda not only holds a Bachelors of Science degree in Computer Information Systems, but she’s also a licensed RealEstate agent, Interior redecorator and world traveler.  Read more of her story below… 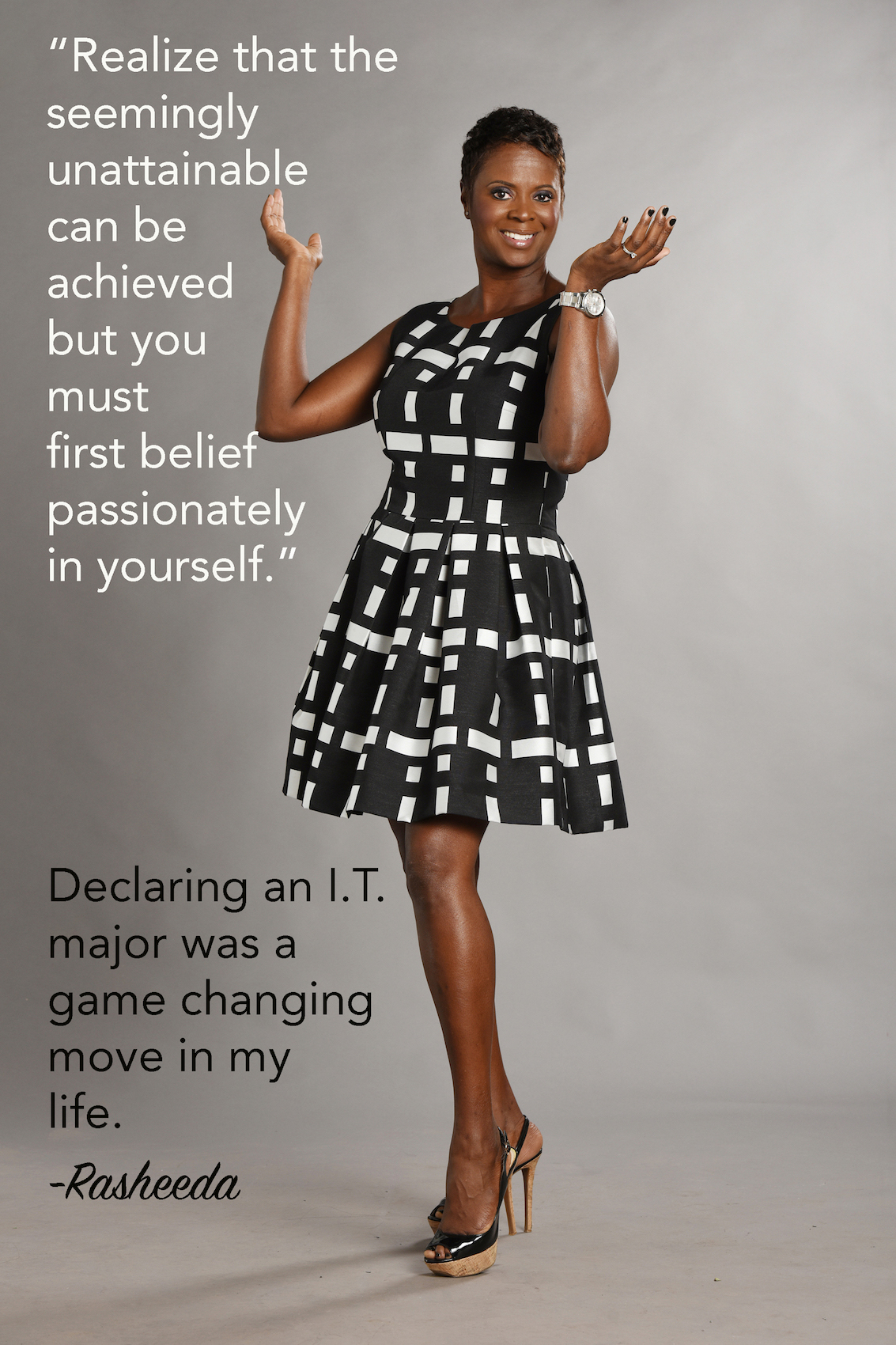 To be honest, this profession somewhat chose me. I knew nothing about computers when I chose my major in college. I always wanted to be a teacher but somewhere around 11th grade had a change of mind. The other things I was interested in such as theatre and modeling my family didn’t quite take serious nor thought were realistic career choices so I cavalierly chose Information Systems. Declaring that major was a game changing move in my life.

At the age of 8 I tragically lost my mother and essentially my dad too.  I  struggled most of my childhood with abandonment issues, low self worth and self esteem as well I was incredibly shy ( something most people today find hard to believe) about me today. I later in life realized that these life altering events were preparing me to fight for myself, own my destiny and recognize that failure was not an option. There were no talks about what we wanted to be when we grew up or what college we wanted to attend. I just knew I had to figure this thing called life out for myself. I figured I could do 1 of 3 things.

Succumb to my circumstances and just exist

Go to the military which was really not an option as I hated being told what to do.

Go to college and make something of myself. I chose the later.

Thankfully I was pretty good academically in HighSchool, graduating with a 3.83 GPA which opened up a number of colleges for me to attend. Top on the list and my biggest regret was HARVARD. I really believed I was good enough and had a dream to attend this school. Unfortunately I allowed my mothers negativity and doubt to overshadow my dream and Harvard was soon off the table in my mind. My take away from that experience and message not only to my sons but to those reading this is to NEVER let others doubts, fears, lack of knowledge or dissension make you change the course and direction of your life. Not everyone will understand your WHY. I encourage everyone to DREAM BIG and in color. You see in life there are no freebies, easy paths nor shortcuts. Get rich schemes just don’t exist. You have to work for what you want, knock down walls and obstacles and face each challenge head on. These principles and ideals not only work in our personal lives but can be applied to our professional lives as well. Realize that the seemingly unattainable can be achieved but you must first belief passionately in yourself. Become your worst critic and your biggest cheerleader.

Today I work as Sr. Middleware Integrator for a large Healthcare company. I’ve been in the I/T filed for over 21 years. I love what I do because I’ve discovered not only am I analytical but I’m a great critical thinker both skills that serve well in this industry. The beauty of I/T is that it’s a huge field. The range of opportunity is incredible and the ability to move around and reposition is possible so long as you are willing to do the work. Everything you touch is backed by technology, from withdrawing money at the ATM to scanning groceries at your local grocer all these things are powered and backed by technology. I graduated from a small college town school called Georgia Southwestern State University with a major in Computer Information Systems and a minor in Business Adminstration. I’ve worked for major corporations ranging from Hewlett Packard, IBM, Accenture, Macy’s and more all of which served me well from a professional and personal growth perspective.  One thing that remains a constant in most all the positions I’ve had is the lack of minority female representation. I have asked numerous managers and recruiters over the years why such is the case and they say it’s because either ” Females in general just don’t apply and   Specifically there seems to a shortage in minority women in the Technology field.”   Don’t get me wrong, I/T has its challenges and as a woman I have come to terms with the lack of seeing people like me in my area of I/T.  What gives me a good chuckle and hope is when people ask me what I do. I proudly tell them I work in Technology and I usually get mouth dropping and shocked looks followed by “I would never guess that” or “You don’t look like what I thought Technology people look like”. I’m 5’10, fairly fashionable, love a 4 inch heel and a great dress while being able to keep it corporately casual and professional in a pair of jeans and well tailored blazer. This I realize is what throws most people off when they see me and I love it! We aren’t all horrible dressers and frumpy introverts. I’m smart, fun, funny, unassuming with a passion for cooking, power tools and world travel. My message is simple, where you’re from doesn’t have to dictate where you’re going.