Top Places To visit Near Banff 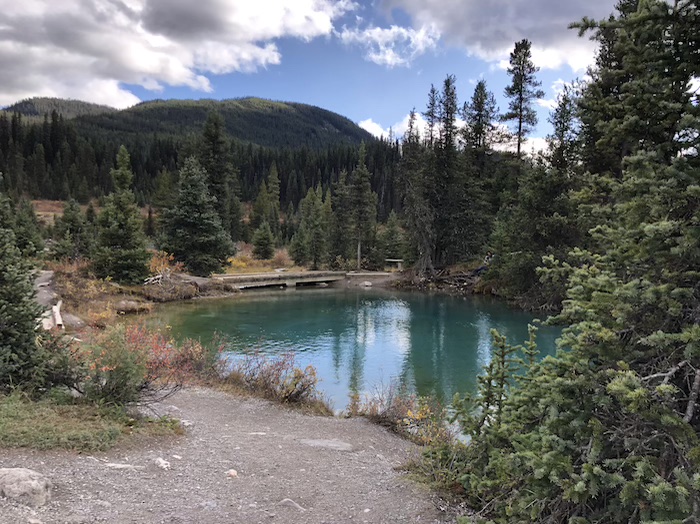 After seeing such wonderful photos on social media I knew one day I would come to Banff to see this gorgeousness for myself.  Well the time had finally come.  You’ll find this weird but I literally traded/cancelled tickets to sunny warm Montego Bay when I found a flight sale to Alberta/Calgary.  Without hesitation my vision of sitting on the beach soaking up the UV rays of the sun, sipping on Rum punch and eating Jerk chicken were overshadowed by visions of playing in the snow ( it was due to snow that week in OCTOBER)!!  My packing list went from maxi dresses and swimsuits to snow boots, coats, scarves and gloves.  I know most people avoid the cold at all costs and would’ve NEVER opted out of sunny Jamaica for snow but not I!   I was here for the adventure… the hunt for Bears and Moose had me feeling like a whole 5 year old waiting on Santa to come down the chimney on Christmas eve.  For me it felt like Christmas in October.

Armed with nothing more than visual clues from Social media we literally planned to just fly by the seat of our pants.  We took a flight from Atlanta connecting through Denver to Alberta.    Due to our early arrival we planned to make the most out of Day1 by heading to Drumheller a short 1.5 hour drive outside of Alberta,  to see the HOODOO’s.. a set of rock formation that are simply beautiful.  Of course I took the opportunity to make it a photoshoot while others took the time to climb up and around.   Drumheller is a small forming mining town very rustic and not very busy with exception of tourist visiting the mine, trains and Hoodos. 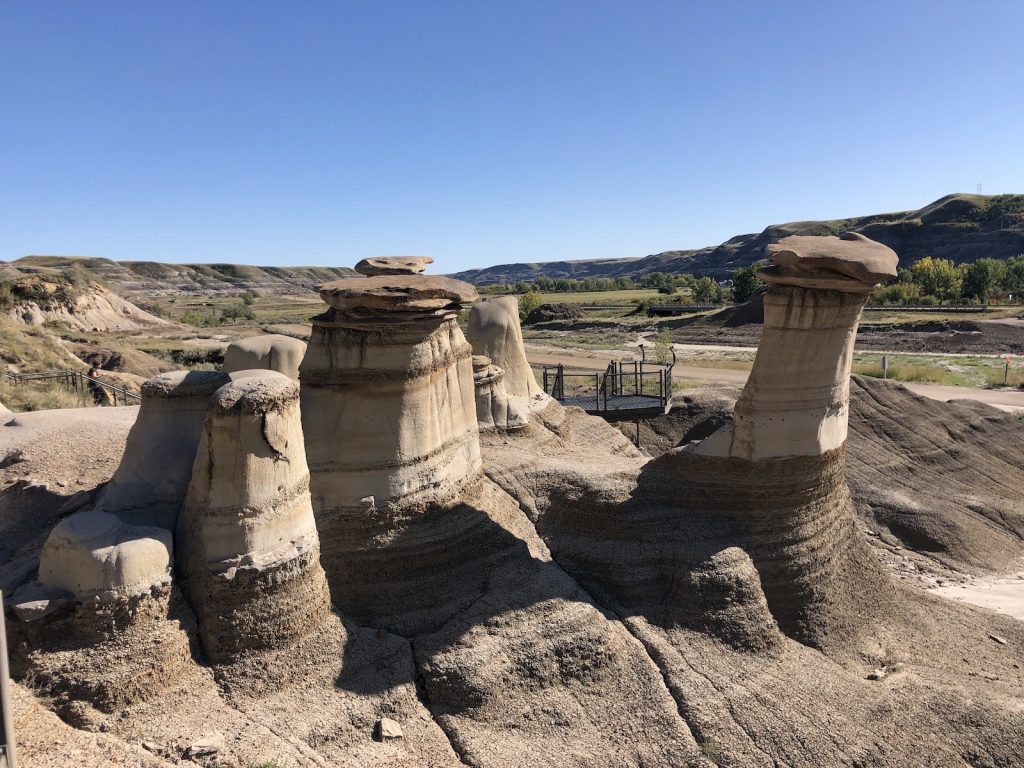 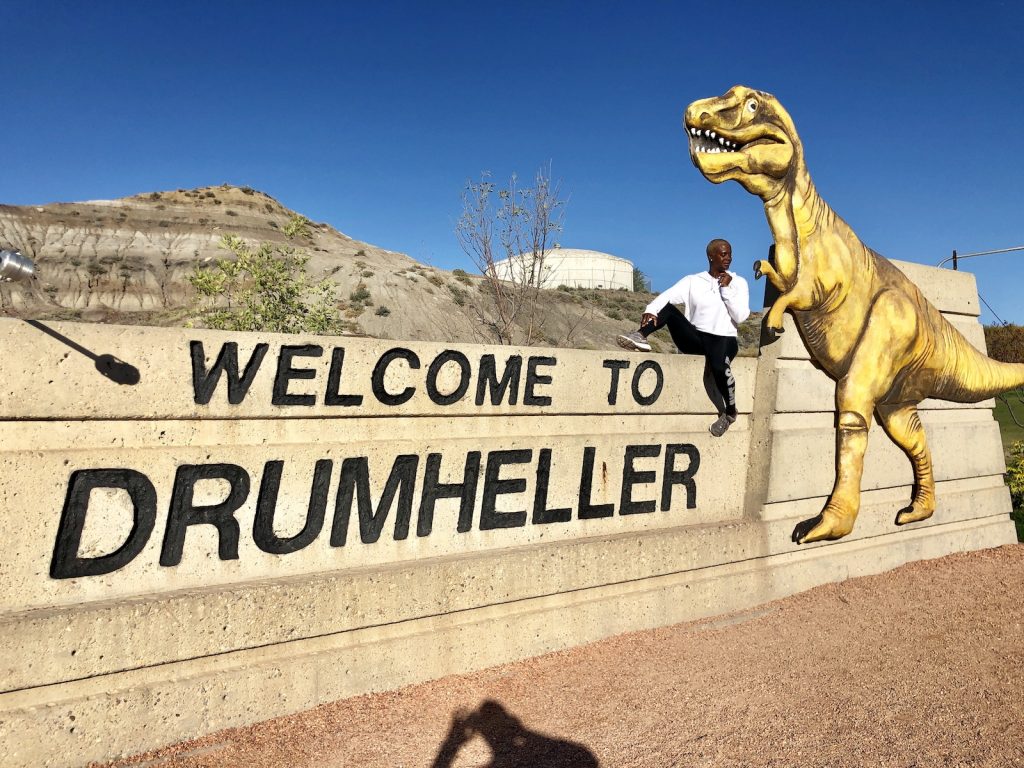 We settled in the first night at the Sheraton Cavalier Calgary Hotel.  Our room was perfectly placed  with the backdrop being that of the Winter Olympic Park.  The next day of our 5 day excursion we would load up the car and drive toward Banff.   By happenstance we passed the Pomeroy Kananaskis Mountain Lodge which we unexpectedly called home for the next 4 nights.  Talk about a happy accident!  This hotel checked off all the boxes.  Cozy, Quaint, Romantic, Kid Friendly, mountain views and the outdoor Nordic Spa was the icing on the cake.  Over the next several days we’d go from fairly warm weather to freezing temps and snow!   Kananaskis would be home base at the end of the day.  I’m glad we stayed here versus Banff.

Days consisted of long drives going in and out of the National Parks stopping whenever we felt curious enough to stop.  Some places I had seen on IG and others were simply pleasant surprises along the way.   ProTIP:  You don’t need to buy the pass to the National Parks.. it’s cheaper to just pay as you go.

BonusTip:  We found out a little late in the game that the day passes are good through 4pm the following day.  We discovered this at the gate a few days in but it was still timely and useful as we continued our exploration from Banff National Park into Jasper National Park.

Jasper National Park was best part for me.  Driving down the Glacier Fields Parkway, frolicking in the road as the snow beat down my face was kid like magic.  We had the road almost to ourselves with the exception of the occasional tour bus and random on coming car. 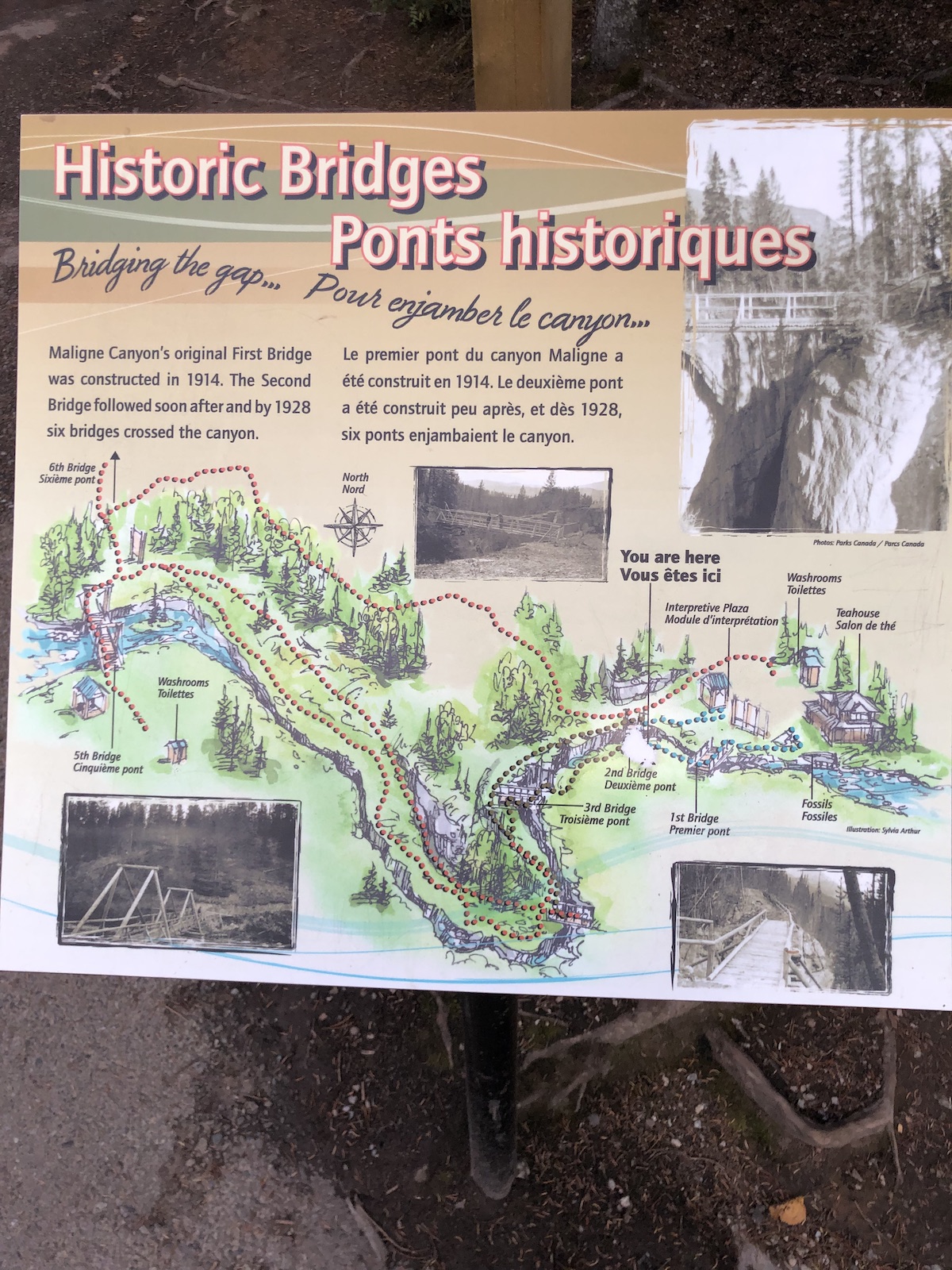 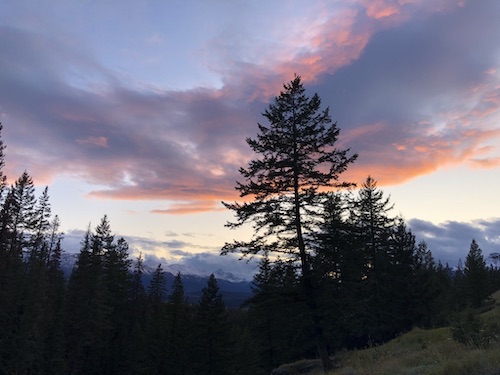 If you’re lucky enough to come at the right time you’ll get to enjoy a beautiful sunset. 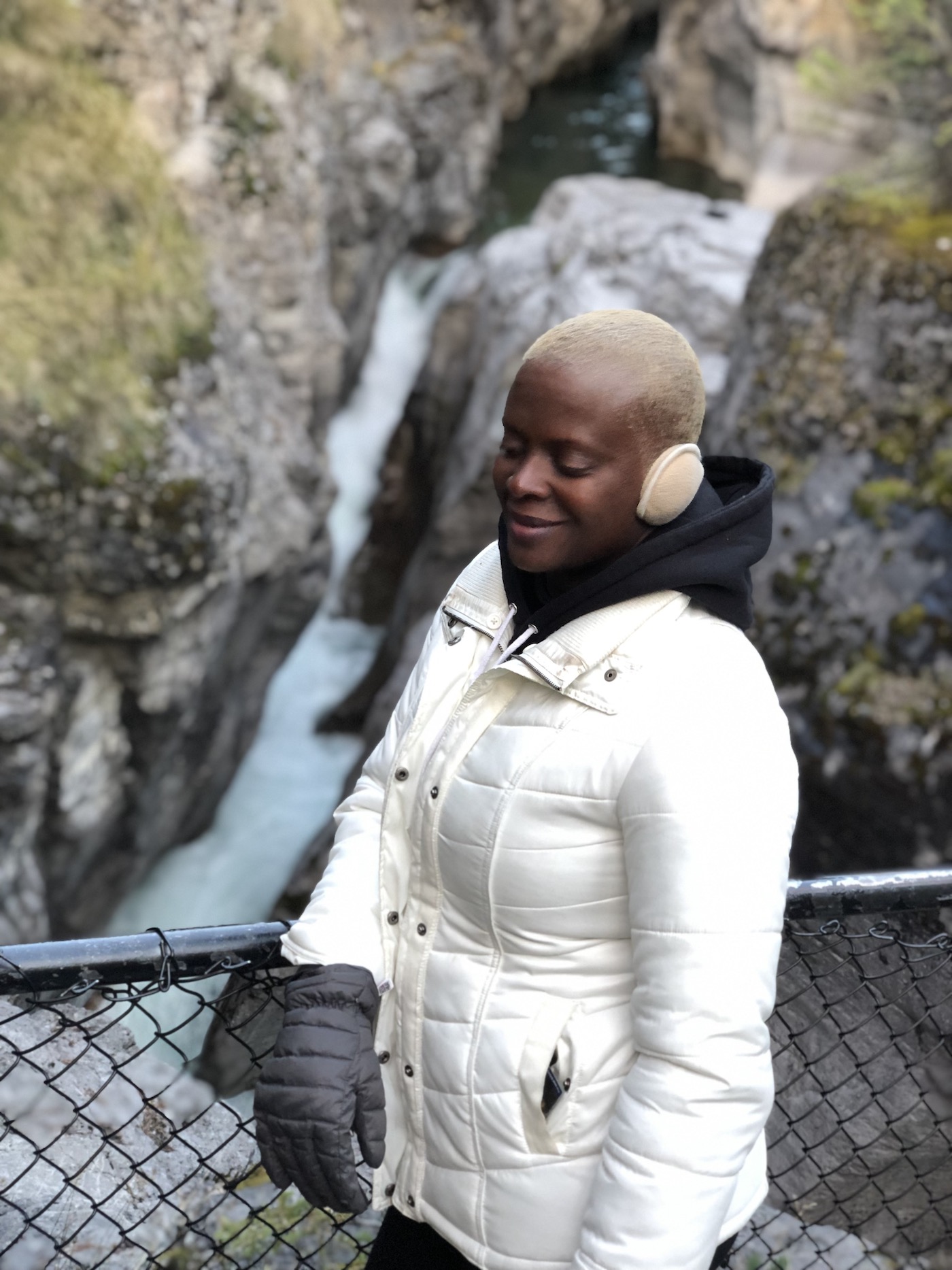 There’s something so tranquil and relaxing listening to the crashing waters of the waterfall. If you come in the winter months the water freezes and the site becomes a spectacular ice cave. 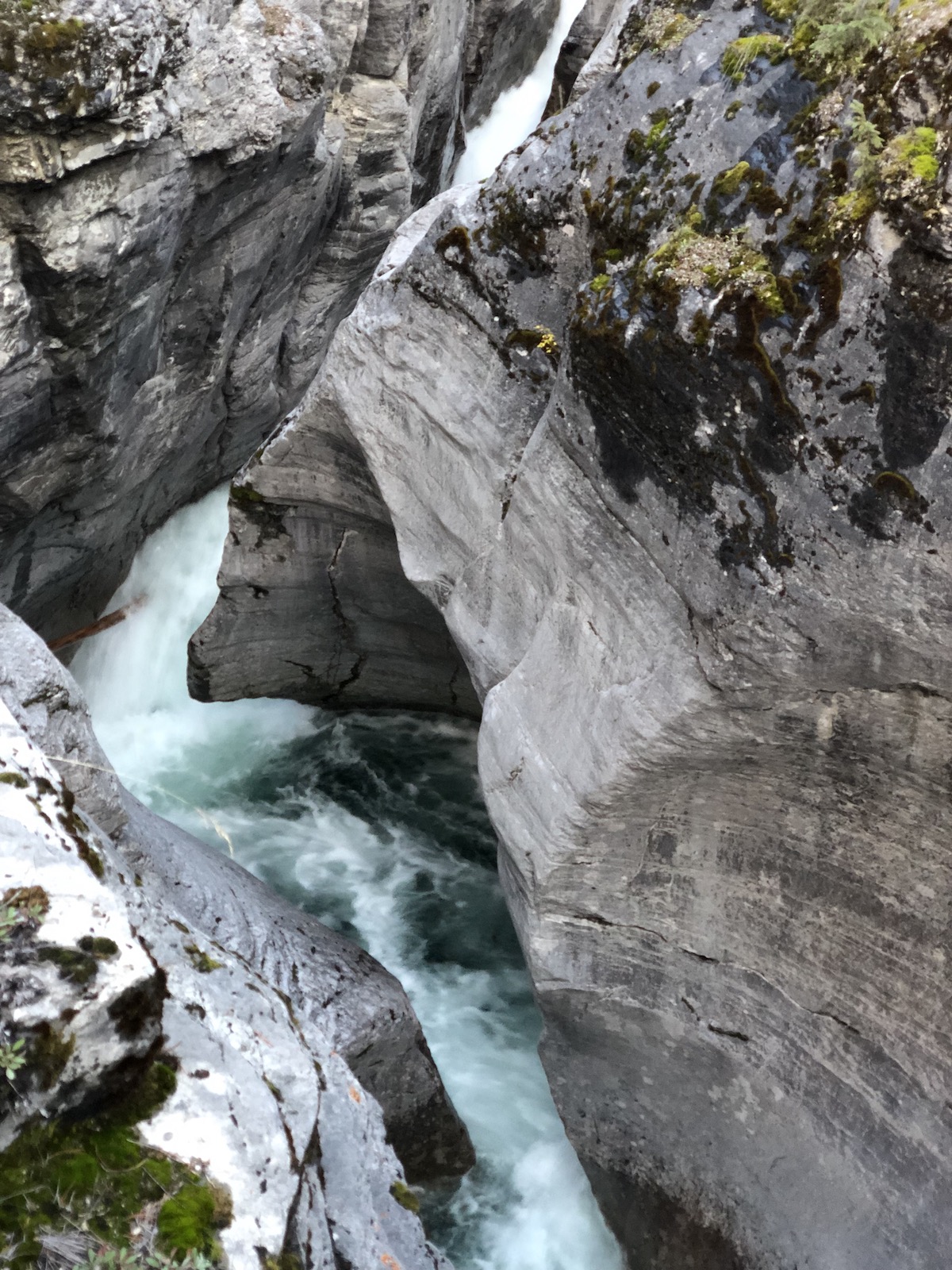 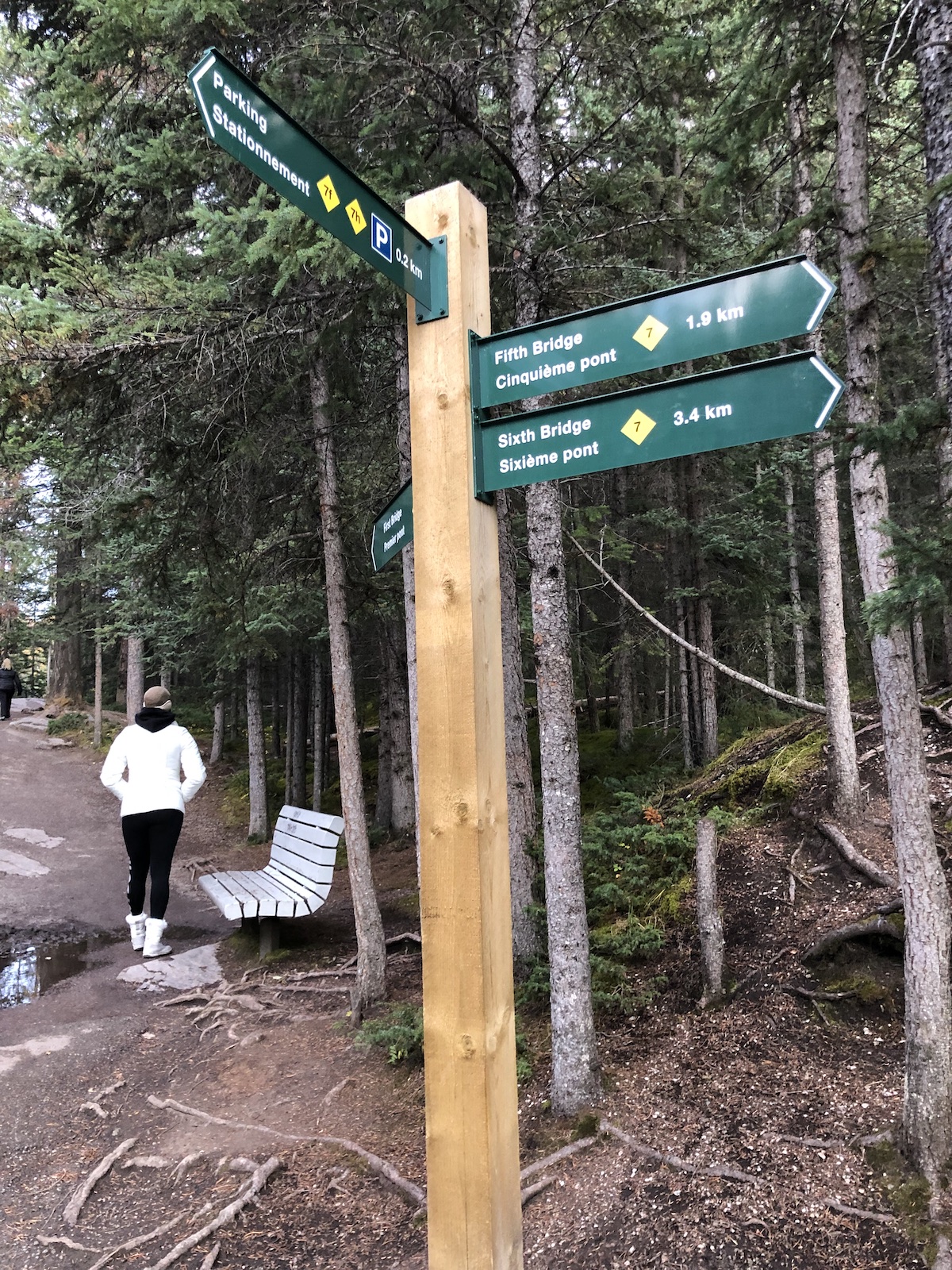 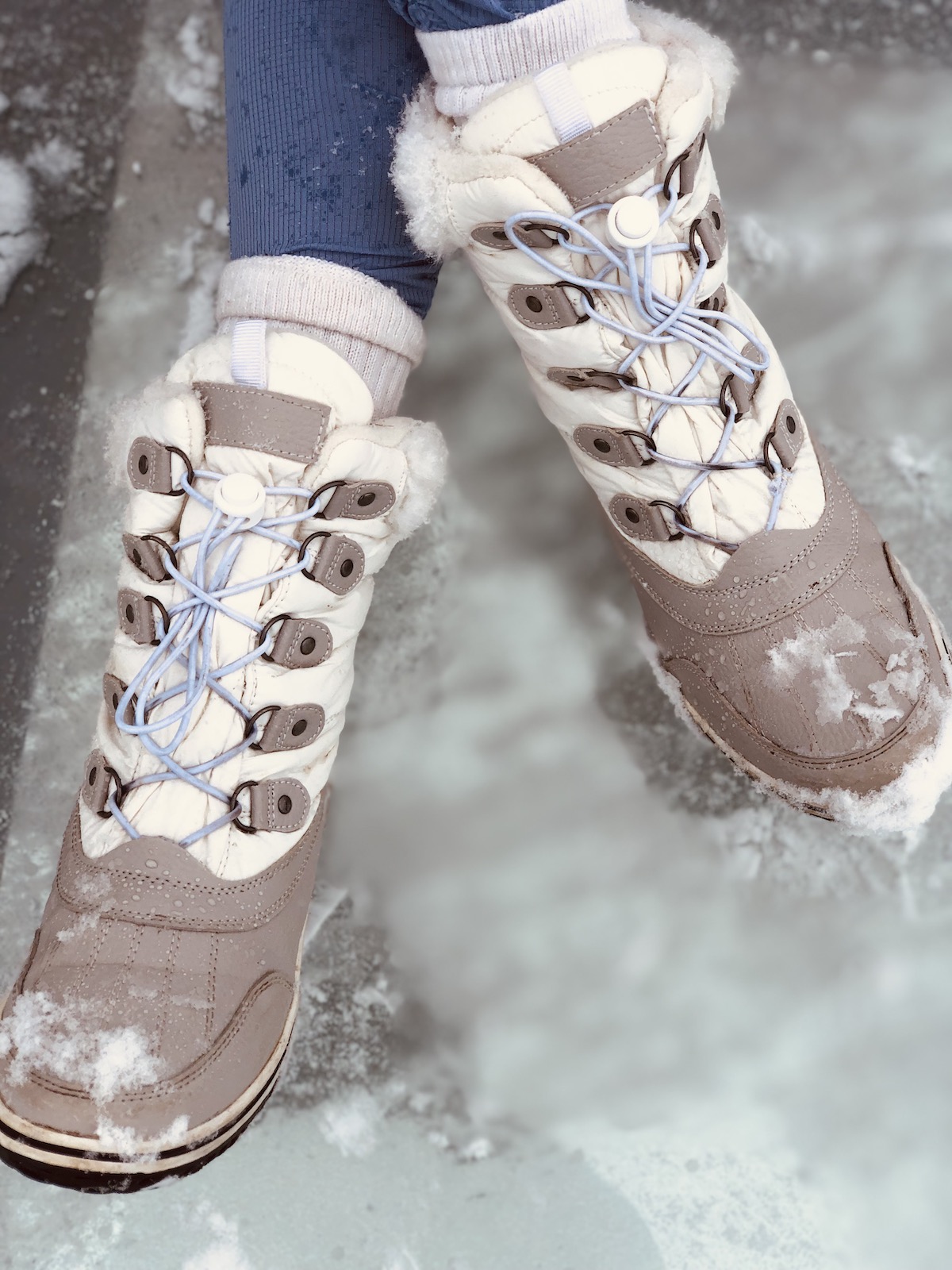 The clear glass floor tiles while slippery when wet were constantly being squeegeed by workers.  The clear floor also reminds you just how high up you really are, almost creating  a feeling of floating allowing you to look down below atop the mountains. If you’re afraid of heights this attraction may not be ideal but I guarantee if you dare you won’t regret it. 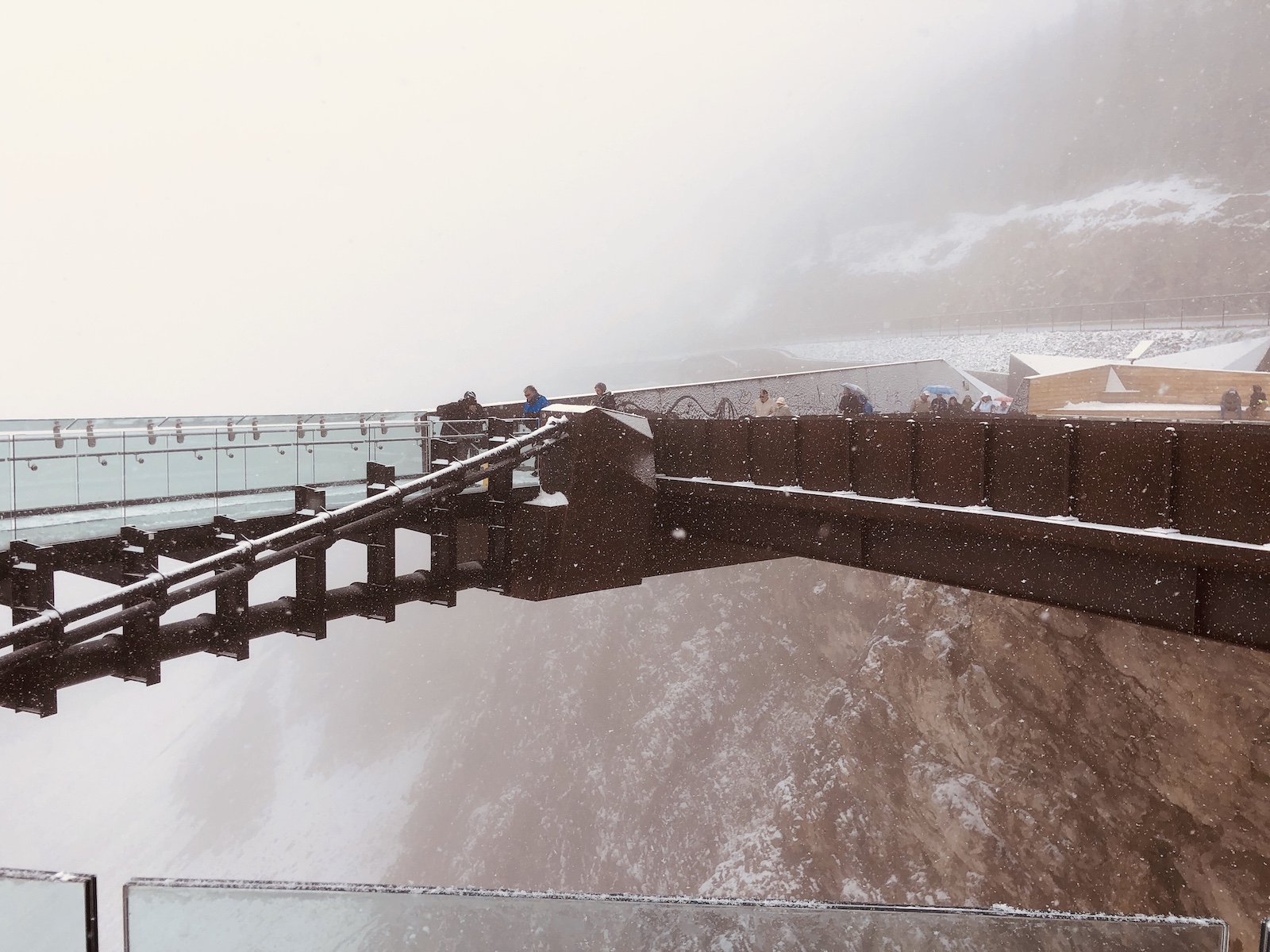 purchased as a package known as Glacier Adventure the deal includes the Glacier as well as the Skywalk. I suggest booking in advance to secure your tour time. It’s also important to note the Glacier known as Athabasca is seasonally open from April – September. Not knowing this tidbit in advance I’m excited to say we made it on one of the last tours of the season.

The pictures sums it up more than words!  We had an amazing time playing in the snow and being amazed not only by the oversized tired trucks used to transport us to the Glacier.  Seeing how thick the ice on this glacier was as well as how methodical of an operation it was to get each tractor carrying people up the hill and onto the glacier was magical.  ProTip: The Falls are only open between May and October.  They close because conditions get too tough to 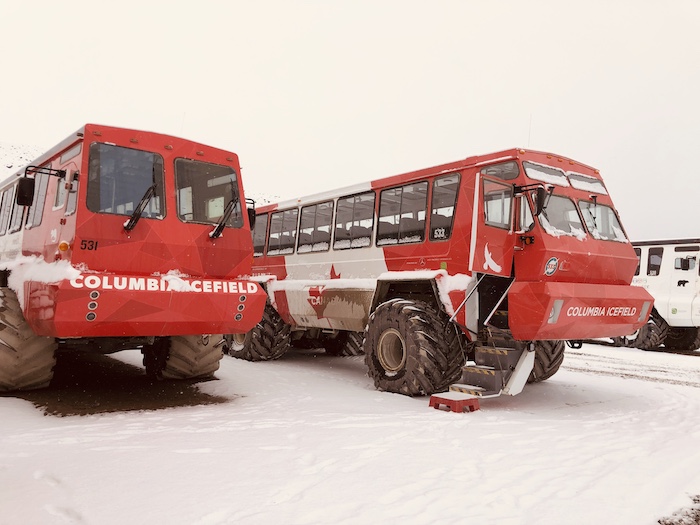 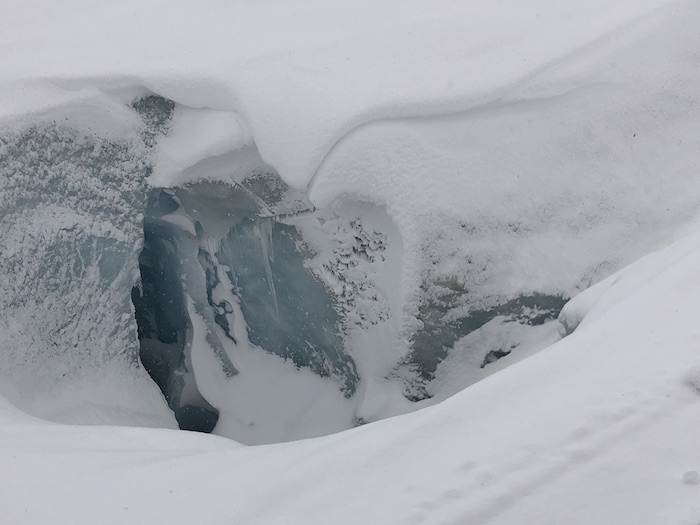 This shows how thick the ice is.

Don’t stand behind the trucks was the warning we all received.

A walking trail that leads to five ( as the name suggests) blue green lakes.   We didn’t make it to all five but it is definitely worth hiking to see. 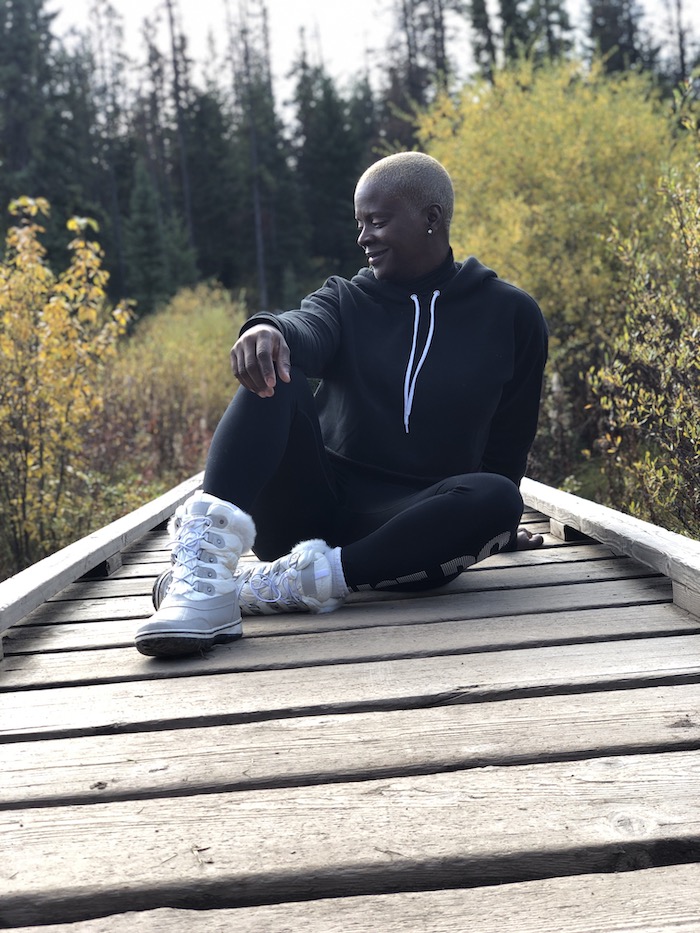 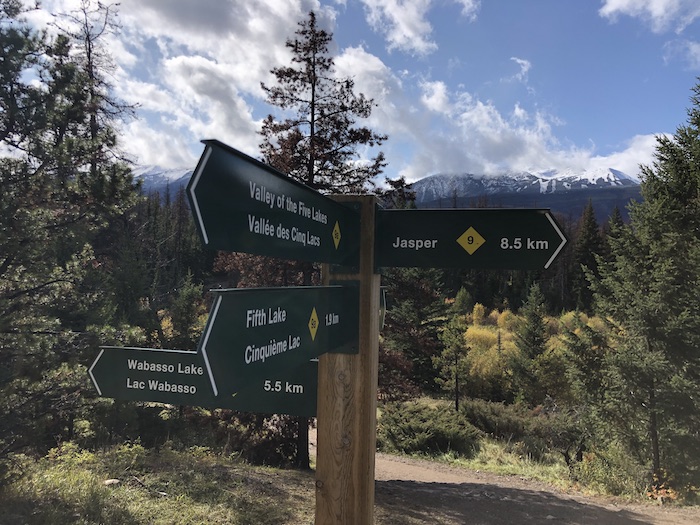 The InkPots at Johnston Canyon

Located within Johnston Canyon was every bit worth the hike and let me tell you it’s a HIKE!  Considered yourself warned that it’s an uphill serious 4 mile hike with waterfalls aka UpperFalls and great views along the way to keep you visually entertained.  I’m glad the kids weren’t aware of this in advance otherwise I honestly don’t think they would’ve agreed to go.  The ink pots are a spectacular set of geo pools blue and green in color. Discovering these ink pots with the beautiful snow capped mountain as a backdrop.  Simply gorgeous!  ProTip:  Don’t step into the ink pots as its quick sand in there. 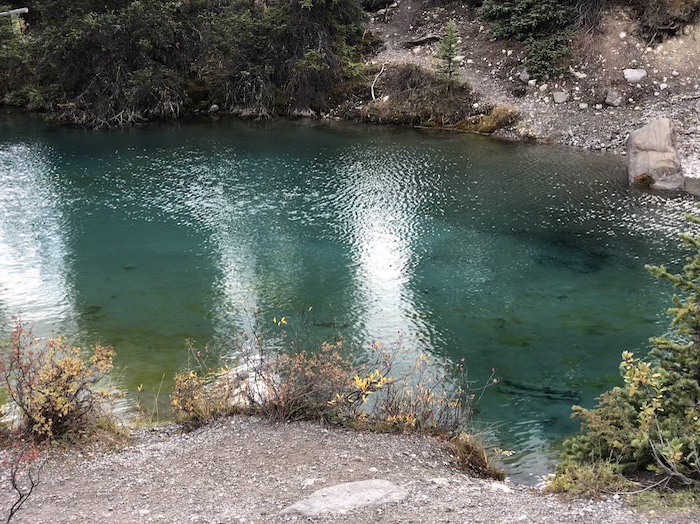 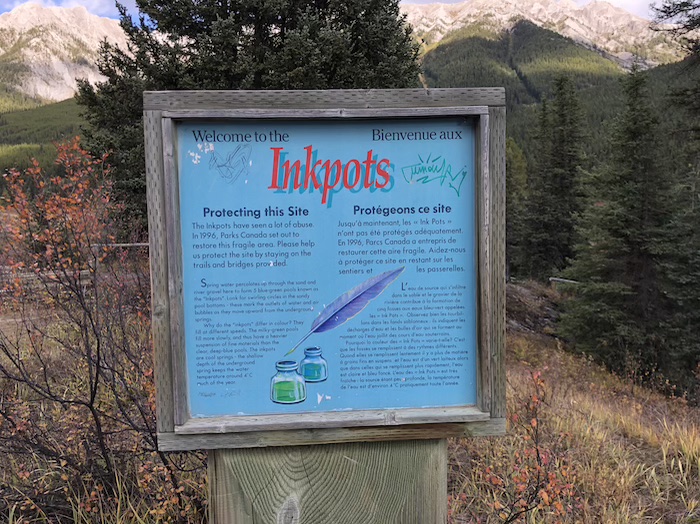 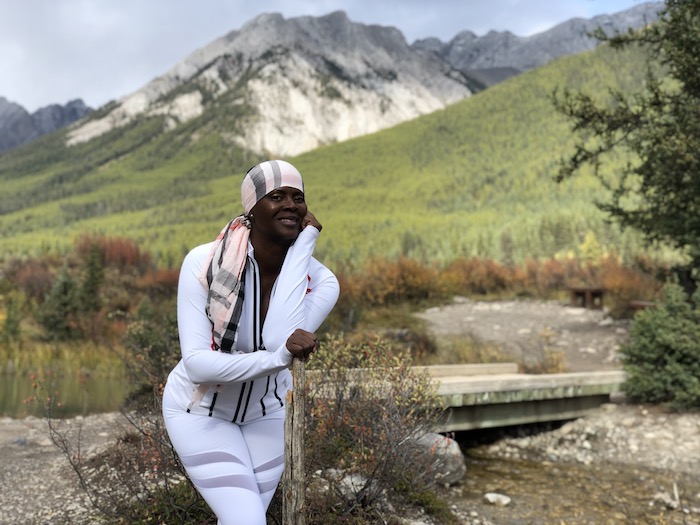 Pyramid Lake is a kidney-shaped lake in Jasper National Park lying at the foot of Pyramid Mountain.  when the weather is more ideal ( it was starting to snow while we were there), you can find the family centric location filled with people kayaking , canoeing, riding the  paddleboat or cycling. 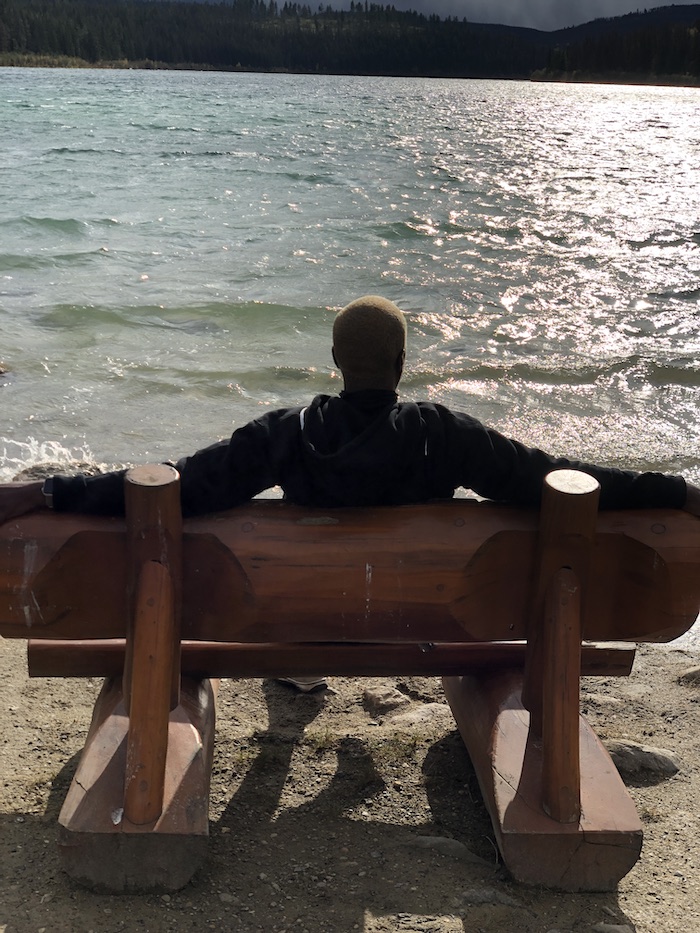 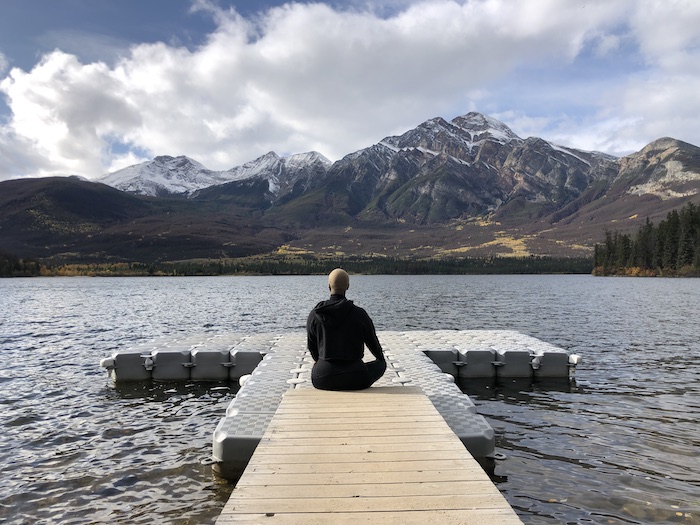 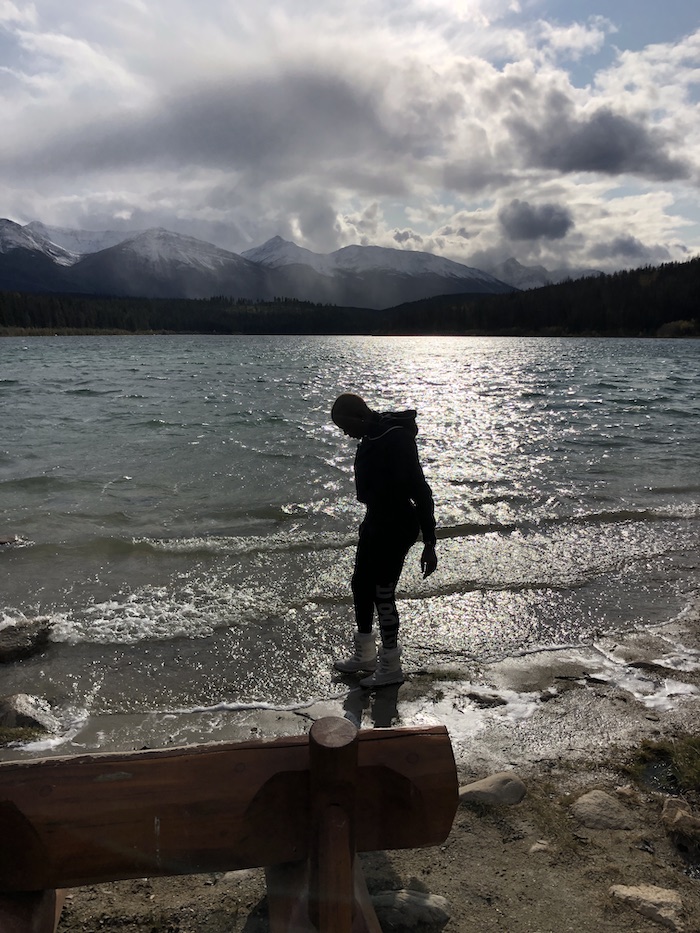 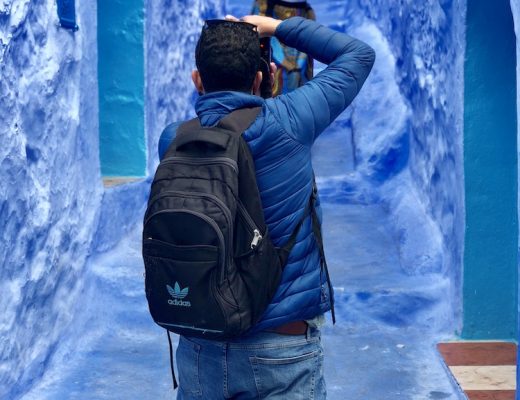 How to Nail a Photoshoot 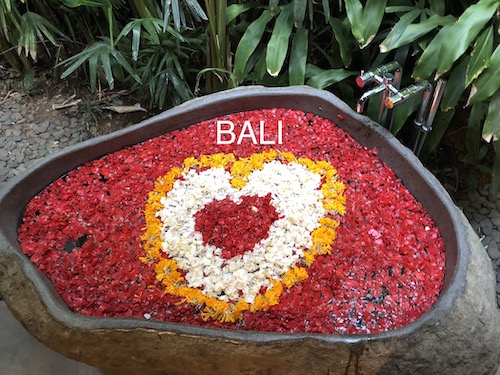